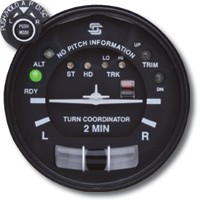 Today I flew my plane home from Waterloo to Ottawa with a brand-new autopilot installed.

I’ve flown over 850 hours, about 120 of them in actual instrument conditions, and all by hand. I’m proud that I can do that, but at the same time, it’s tiring: after 8 hours bumping around in cumulus clouds and dodging storms on the Stormscope, I’m exhausted beyond anything I’d ever imagined. Even 4 hours in good VFR weather can be tiring, because of the constant attention needed to keep the plane straight, level, and on course.

I knew it was time to improve rather than just maintain my plane, and I also considered an IFR GPS and a new paint job (both about the same cost), but the autopilot gave me the biggest safety and operational benefits for the money. I called a few places for quotes, but the only one that answered my calls and questions consistently was Kitchener Aero, where owner Barry Aylward went out of his way to carry on a friendly e-mail and phone correspondence for half a year while I hemmed and hawed, then fit me right in as soon as I made up my mind, as if I were one of his bizjet customers rather than a tight-fisted Cherokee owner.

I decided on the S-TEC System 20, a rate-based autopilot (much smoother and more reliable than old APs) that is built into a turn coordinator, and replaces that instrument on my panel without needing any extra space. The S-TEC 20 is a single-axis autopilot — that means that it controls roll (and heading), but not pitch (and altitude) or yaw. Barry warned me that I’d wish I’d paid a few thousand extra for the S-TEC 30 with altitude hold, but I was already close to my spending limit, and knew I’d end up asking for extra maintenance work on my existing avionics (and a new 406 MHz ELT, since the plane was there anyway …).

Kitchener Aero sent me up on a test flight with one of its people, ready to adjust the autopilot, but it was absolutely perfectly tuned. While the S-TEC 20 can’t hold an altitude, here’s what it can do:

We were able to try all of these during the test flight northwest of Waterloo (except for the LOC tracking, due to a miscommunication with Waterloo tower). Unlike GPS tracks, VOR needles tend to scallop — wag back and forth — and an autopilot that overreacts to that will soon make the passengers (and pilot) seasick with all the rocking. The S-TEC 20 responded very gently, and almost unnoticeably, to the scalloping, even close to the VOR.

First cross-country with an autopilot

During my flight home, I had a chance to use both modes for a bit over two hours. I used VOR-tracking mode to track northeast outbound from Waterloo, then heading mode (with frequent adjustments) to fly a DME arc just outside Toronto terminal airspace until I could join my airways, then back to VOR-tracking mode as I followed the airways and switched from VOR to VOR. Up at 9,500 ft, above the broken layer of cumulus cloud, the air was smooth as silk, and I was able to fly hands off with only an adjustment every 5 minutes or so to the elevator trim to hold altitude. Barry was wrong — I wasn’t missing altitude hold at all.

Unfortunately, summer is summer, and eventually, the cloud layer rose up to meet me. I had to descend down below it, and my nice smooth flight became a mechanical rodeo bull. The autopilot still did a good job holding heading and tracking the VORs, though the turns in turbulence were more aggressive and noticeable, but I found myself trimming every 30 seconds or so as my pitch and altitude shot up and down in rising and falling air columns. Barry was right — in the turbulence, I wished I had altitude hold.

The good news is that the S-TEC 20 can easily be upgraded to an S-TEC 30, which does support altitude hold and electric trim. Maybe in a year or two.

I think the autopilot is going to be a big part of my flying from now on. I’ve enjoyed the bragging rights of always hand-flying, but 9 years of bragging is enough. Besides, if flying is less tiring, maybe I’ll do more of it, and travel further: the prairies, the Arctic, the Mississippi, even the Florida Keys and the West Coast are all out there waiting for me.

13 Responses to Adding an autopilot